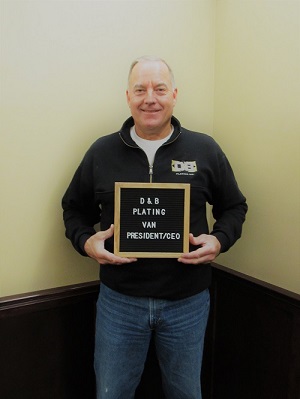 October 3, 2003. That’s the day Van took a leap of faith and bought D&B Plating without any knowledge of the plating industry. What he did have, though, was a knowledge of how to treat people and a great team he believed in. Thanks to the hard work of that team and Van’s leadership, D&B has grown from 31 employees to 110 and from four lines and 25,000 square feet to eight lines and 55,000 square feet. And additional growth is on the horizon, which will ensure D&B retains its position as one of the Midwest’s leading zinc and chromate plating companies.

Before purchasing D&B, Van spent 13 years at an investment banking firm, followed by several years as vice president of sales for Shuffle Master, a position that enabled him to travel all over the world.

He has a degree in Finance from the University of Minnesota and grew up just miles from D&B, where he still enjoys his work every single day. When not at work, Van enjoys playing golf (he says he could play seven days a week), shooting handguns and practicing the martial arts. He also enjoys the outdoors—he has a cabin on the Minnesota/Canadian border—and working out, which he does four times a week. A family man, he enjoys hiking and skiing with his sons and their wives and spending time with his first grandchild.